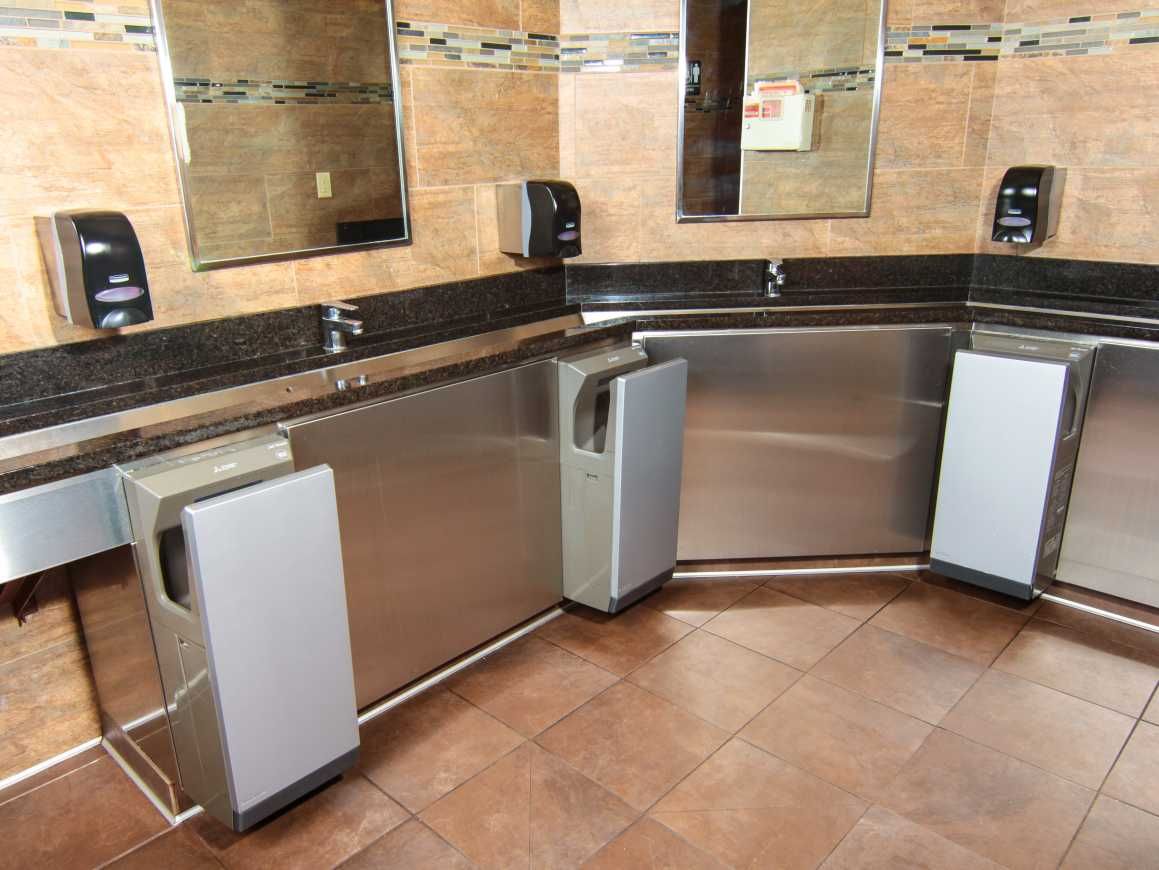 Jet Towel products work daily to incorporate more energy efficiency into operations.
Not all highway plazas are created equal. Trail’s Travel Center, on the I-90 and I-35 corridor in Albert Lea, Minnesota, is proof of that. The 26,000-square-foot travel center is the usual highway plaza in the sense of offering restaurants, restrooms and fueling stations. Facility maintenance manager Trent Gorton noted how the travel center is unusual, though: “It’s built like a chalet, with a fireplace and theater. In short, it’s a higher-end facility. When we renovated recently, that meant higher-end bathrooms.” To offer the quality and aesthetic in the restrooms that patrons experience elsewhere in the facility, the travel center chose Jet Towel High-speed Hand Dryers from Mitsubishi Electric Cooling & Heating (Mitsubishi Electric).

General manager Dustin Trail said, “We wanted to remodel the public restrooms – freshen them up a little. Every year, 1.5 to 2.5 million people pass through here, so the restrooms get good use.” Trail and Gorton knew that selecting the right hand dryer is a key decision in restroom design. They’d learned the hard way: “The noise of our old dryers used to echo down the hallway and into the restaurant area. They were so loud. They’d also shoot water and oils that would build up on the wall. Before that, we had paper towels. That was thousands of dollars a month,” said Trail.

Gorton noted that paper towels also encouraged behavior that created ample maintenance work. “With paper towels, you get problems. People vandalize them, or they take a big wad of towels and stick them in the sink or toilet.” Avoiding the hassle and cost of paper towels was a must.

“Doing away with paper towels is not a big deal for the people who come through here, either. There’s been a change in expectations; people know not to expect paper towels now. They’re expensive and they make a mess. It’s not rocket science. Public restroom areas like in travel centers and parks – none of them have paper towels,” said Trail.

With their eye on electric hand dryers as a way to create an upscale environment while avoiding the pitfalls of paper towels, the team then considered the various technologies and brands they’d tried over the years. Trail said, “The Xlerator® – those dryers were rough. You get one going and there’s that whistle sound. You get a couple of them going at the same time and it sounds like the building is going to take off. So when we had Xlerator dryers, we could only have one in a restroom at a time, which meant people lined up to use it. The line got long, and water dripped all over the floor.”

He continued, “We also tried Dyson [hand dryers]. They were really expensive and they didn’t last very long – not even two years. So we didn’t want to go back to those.”

The Mitsubishi Electric Jet Towel stood out as an appealing alternative. Trail said, “We’d seen them in public restrooms before, and liked them. When we researched some more, we found that they end up being one of the quietest ones, too – much quieter than Dyson.”

Jet Towel also offered an impressive level of energy efficiency. This appealed to Gorton since he considers the travel center “an energy-conscious, or even energy-progressive facility,” and works daily to incorporate more energy efficiency into operations. After LED lighting, efficient hand dryers were an obvious next step.

Finally, Gorton liked Jet Towel “because the color of the housing doesn’t reveal as much dirt as Dyson – all that grime that gets blown off people’s hands.”

The team mounted six dryers – three in the men’s room, three in the women’s – below counter-height, between the sinks. “So people wash their hands and go straight down into the hand dryer. Much cleaner,” said Trail. Since keeping the restrooms clean and upscale-looking was such an important factor when selecting dryers, this has been a big win for the facility. “Congestion is also not an issue anymore, and these are definitely a quieter unit, which has been key.”

Gorton said, “Overall, we’re very satisfied. These dryers are easy to keep in nice-looking condition and the drain on the bottom works well. I think the market is growing for these dryers, and they’ll soon just be how things are done.”
Download Brochure Contact a Distributor/Rep

Download our latest Jet Towel brochure to get the most up-to-date and detailed information about Jet Towel and each product series.